The art work is complete and everything for Street Party’s latest  album is off to Discmasters in Chicago for manufacturing! 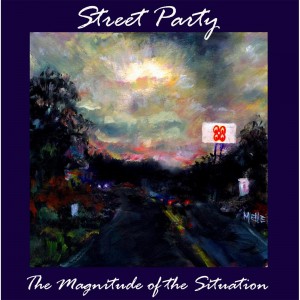 The new album titled, “The Magnitude of the Situation” is the sophomore effort  from the guys and they cannot wait to get it in the hands of their fans. Seven original songs along with one surprise cover make up this album.

The original cover art was painted by Melle, who also did the artwork for Street Party’s first album, Beautifully Complicated.

Kelly, Chris, and Jeff hope that everyone loves this album as much as they have enjoyed bringing it to reality. Stay tuned for an announcement in December of the CD release party!

Thanks to the best fans and friends in the world!