Street Party is comprised of four friends who first met in 1980, played together for a  while and then went their own way. Fast forward to present day, and

thanks to Facebook Kelly, Chris, Sam, and Jeff reconnected and decided it was time to get back together again as a group.

We play a varied mix of original rock/pop tunes that Kelly has written over the years as well as performing our versions of popular rock covers from the 60’s to present time.

Our repertoire is very diverse which allows us to tailor a show to our clients needs. Whether it’s a Festival, Night Club or Private Event, you can count on quality entertainment and professional service every time.

We believe that music is an important part of life. We are three guys who enjoy making good music together and are very happy that we are able to share the music we create with you. 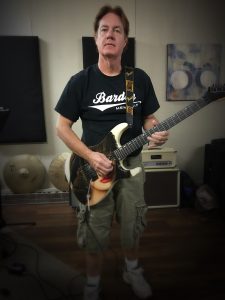 Kelly has been playing guitar for more years than anyone can count. He has been writing and performing original songs for decades. He has spent many years touring the bars and clubs in North Carolina with bands such as Street Talk, Southern Alliance and for 10 years ZEROX. Kelly has played solo acoustic shows for festivals throughout the state. Kelly recorded and released a solo CD in the 90’s that is still available on iTunes. Kelly plays guitar, mandolin, harmonica, bass guitar, piano and will from time to time has been known to hit drums to keep time with life.

Hello! I am going to try to fill you in on a little bit of my background. I originally started painting my face as Gene Simmons back in middle school because that was cool (or so we thought!). From there, we developed a band. I played bass, Fuzzy was on the drums, Darrel on the guitar as Ace and Bill on the guitar as Paul. I emerged from this experience with a keen interest in learning more about music. I eventually learned to play and joined Fuzzy, Rick, and Kevin Shaw to play in the ninth grade talent show. Although Kevin and I had to run to a jazz band gig after that show, Rick and Fuzzy were mobbed by autograph seekers. I will never forget feeling that I had missed out on something. 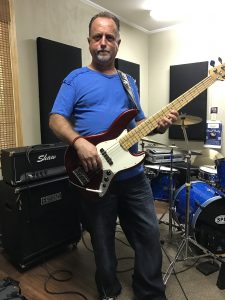 I eventually played in the jazz band for four years and played the electric bass in the marching band for several years. What a sight! Two band members pushing my battery charged amp across the field while I rocked out to “Another One Bites the Dust!”

I joined a group in high school called Street Talk with the current members of Street Party, Kelly and Jeff. Sammy was also a part of Street Talk but has since pursued other career interests. It was a combination of talent and experience. I did not fit in but I had a Fender Precision with a Fender amp. I worked my way into the group but had a long way to go. Once we jelled, Jeff went forward with his life and I joined Zerox, a cover band with Kelly, Kevin, and Fuzzy. We rocked pretty hard and were really tight. Fuzzy and I had been friends forever; Kelly and I had played for many years, and I had known Kevin for a long time as well. We didn’t achieve much notoriety but we had a good time. Listening back on the recordings we made, we were really tight!

Soon afterwards, I decided school was the only place for me. I sold my stuff, something that I now regret. I then received a BS in Math and an MBA in Business, as well as achieving my Certified Public Accountant designation. I also married, have two girls now, plus a granddaughter!

Jeff and Kelly got back with me in September 2009. I was not sure I wanted to actually pick up a bass. Remember, it had been many years since I picked up a bass guitar! So, I met with Jeff and Kelly and we had a great time! Stories were told, memories were shared, and I remembered that it’s all about the music. I returned with a borrowed guitar from Kelly and continue to practice constantly because it is something I love to do!

We now have a wide selection of music within the Rock n Roll spectrum. Kelly has provided Street Party many nice originals and continues to write. I enjoy all the songs we play and it shows in our performance. I appreciate you taking the time to learn a little more about me and Street Party. We are simply a group of friends who enjoy entertaining our friends! 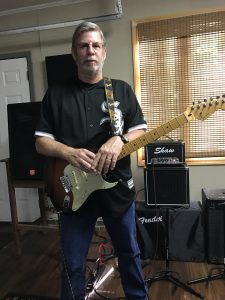 Sam has been play guitar for more years than he would like to remember like to remember. He started out in the awesome 80’s in Harvest, then Street Talk with Kelly and Jeff. Later he also played the local bar circuit with Eastwind and Latigo. Life called and Sam gave up the bands for a number of years to devote his time to a career. He never gave up his love of music though. After retirement he was invited over to jam with the guys in a Street Party as they helped him get back on the horse so to speak. He walked into his first time playing with Street Party in many years and was greeted with “Welcome Home”. Sam is excited to be back with the guys and looking forward to making great music with them for a long time to come. 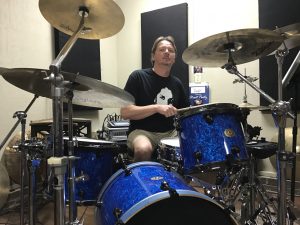 Jeff joined the school band in the 6th grade and hasn’t stopped drumming to this day. He played in the Jazz band in high school where he met Chris and also played in several triad bands in the later 70’s and early 80’s including Harvest and later Street Talk where he met Kelly. Classical, Jazz, Rock, Country, no matter the genre, he has enjoyed listening and performing a variety of music over the years and doesn’t plan on stopping any time soon…..